I remember when these types of card involved lots of measuring, careful cutting and folding; thank goodness for dies that take the hassle out of the whole thing. 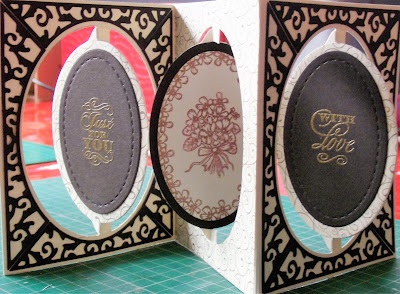 Of course, you can make the card out of as many panels as you like; I prefer an odd number and for me three panels are ideal.  I used pearlescent cream card to cut three of the base panels using the Oval Accordion Die set designed by Karen Burniston and made by Elizabeth Craft Dies; brown card to cut six lots of the oval flourish frame set to make the three fancy frames; I also used the base die to cut three panels from some cream and brown pearlescent scrapbooking paper.  The panels cut from the scrapbooking paper were trimmed to provide three inner ovals and three outer panels (minus the flap at the side). 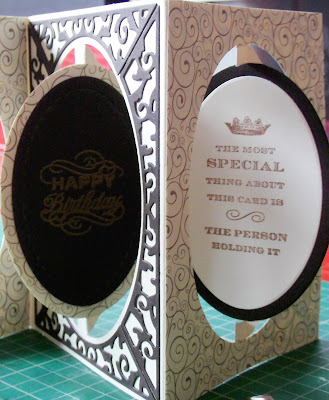 To make up the base card you trim the side flap and the tab from the inner oval from one of the panels; score the flaps on the two remaining panels and glue the three sections together to create a continuous run.  I didn't glue the ovals together using the tabs at this point, as it is easier to decorate the outer panels if you can lay them flat.  On one side of the card I used two fancy frames and one cream and brown outer, on the other I reversed the layout.  Once the outer sections of the card were complete, I went to work on the toppers for the ovals.  I used the largest of the accompanying matting and layering ovals to cut three cream ovals and the three brown ovals which were also embellished with the faux stitching inner edge die.

The three brown ovals were stamped with sentiments by Anna Griffin and heat embossed, using gold detail embossing powder.  One of the smaller cream ovals was left blank to allow a handwritten greeting; one was stamped with another Anna Griffin sentiment, using Sepia Archival ink and the third was stamped with a bunch of flowers stamp that I have had for ages.  I used the top of the same stamp to create the fancy border round the edge.  I had to cut three more brown ovals using the inner section of the base plate from brown card for matting the smaller cream ovals.  The smaller brown ovals were matted onto the cream and brown oval panels.  Before the toppers were added to the card, I connected the oval sections together using the tabs and ensuring that the oval panels would concertina in the opposite direction to the outer sections.  The oval toppers were then glued on, hiding the connecting tabs.
Posted by Sarah Brennan at 12:56