Back to another popular combination - a masculine card which started life as a mixed media tag!  I like to use cream and black as a combination as I find it less stark then black and white. 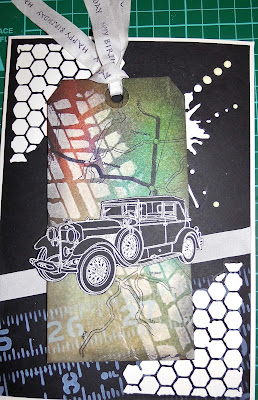 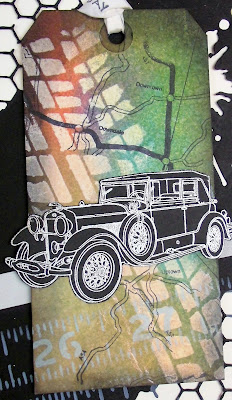 Once again I started with the tag design, then thought about how I could integrate it onto a card.  I laid the Treads layering stencil diagonally across the #8 Manila tag and added Antique Linen distress paint with a blending tool.  Once dry, the Measured layering stencil was was placed at an angle across the bottom and the same technique was used; this time with Stormy Sky distress paint.  I am avidly collecting the new Tim Holtz colours of 2015 so used Abandoned Coral and Cracked Pistachio distress inks with Pumice Stone, as well as Walnut Stain and Black Soot at the edge to provide depth and add to the 'vintage' look.  The colour was heat set, before the map stamp from the AOD 10 set (Mens) by The Stamp Man was added several times with black Archival ink. 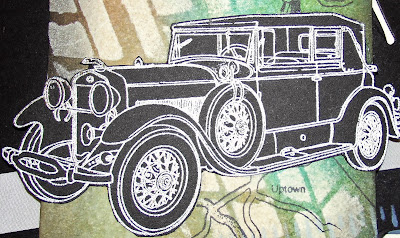 I decided to use an old vintage car stamp from a discontinued set by Crafter's Companion to mask the join between the two sections of map.  To add to the contrast, I used Versamark ink and cream embossing powder on black card, before cutting out the resulting image and gluing it to the tag.  As usual, I used a sentiment, repeatedly stamped along seam binding, to finish off the tag; this way I didn't detract from the look of the tag/card.
Now all I had to do was decide how to finish off the card.  The base is an A4 piece of cream card, folded in half to make an A5 portrait blank.  I cut a piece of black card 14.3cm x 20.5cm and used the honeycomb die from the Tim Holtz Mixed Media Sizzix Thinlits in the top left and bottom right corner; I also used the splat die from the Scribbles and Splat set at the top right. 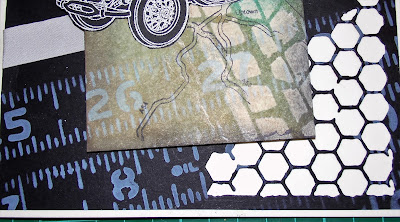 Although I liked the way that the card was coming together, I didn't feel that was a good enough connection between the tag and the background.  It occurred to me that by using the Measured layering stencil across the bottom of the black backing card, I would solve the problem.  In order to get everything to line up, I placed the tag on the background where I wanted it to go and laid the stencil across it, lining it up with the image on the tag.  I taped the stencil into place either side of the tag, then slid the tag out of the way.  After that, it was easy to add the Stormy Sky paint to the black card using a blending tool.  I also wrapped some seam binding around the backing card, before sticking it to the front of the base card.  The tag was mounted onto the card using foam pads for dimension, taking care to line up all the measuring tape markings. 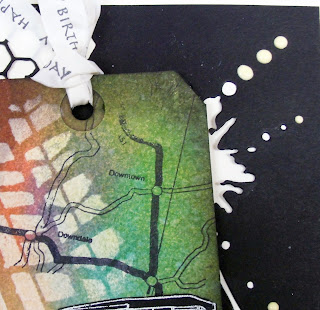 As a final touch, some Buttermilk Nuvo Crystal Drops by Tonic Studios were added to the 'splat'.
I am entering this card into the SimonSays Stamp Wednesday Challenge  (No Designer Paper), as every element has been created from plain card.  Also into the Tag It challenge on SanDee and Amelie's Steampunk challenge site.
Although the tag has been added to a card, it could just as easily stand alone.