I always seem to come back to zentangle as it is so relaxing.  Unfortunately the stamps that I used for this card are now unavailable - and I did look online to check.  However, I am sure anyone wanting to use the idea could find suitable substitutions. 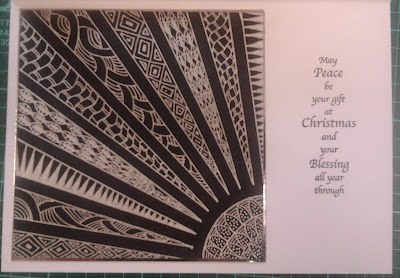 As usual the card started with some zentangling, using a stencil this time (Creative Expressions - Sunrise Mask); but for a change I decided to experiment with black card, and used a silver pen to draw round each section of the stencil.  I repeated all of the patterns but distributed them randomly.  The finished piece was matted onto silver mirri, leaving a narrow border. 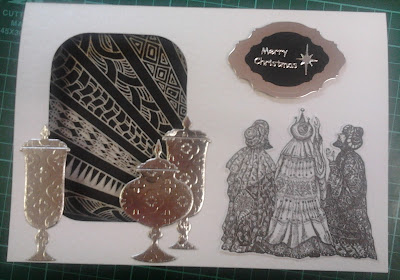 I took inspiration for the zentangling from the detail on the wise men's robes on the stamp (designed by Helen Chilton for Elusive Images). I experimented initially with heat embossing in silver, but the stamp is so detailed that the image wasn't crisp even with detail powder, so in the end I used black Versafine ink on supersmooth white card and cut out the image leaving a narrow border.  Having cut 2 of the Vintage Apothecary  Jar and one of the Candy Jar dies by Memory Box out of silver mirri card, I ran them all through the Cuttlebug Moroccan embossing folder and then attached the lids to the jars using small pieces of tape.  I used the Go Kreate Rectangular Frilly Frames #5 to mat and layer the peel off sentiment and added a star so that the Wise Men had something to gaze up at.  When I started laying out all the elements I quickly realised that they were not all going to fit onto an A5 card blank, and that an 8"x8" card didn't work either.  I hit on the idea of cutting an aperture into the front of the card and putting the zentangle panel inside with the stamped verse.  After that, the rest of the layout came together quickly.  I used a sheet of A4 linen card to create the A5 landscape card blank, and the outside of the smallest rectangle in the Xcut shape cutting system for the aperture.