For once, I have given stamping a rest and focused on embossing to create a quick and easy wedding card.  It can easily be adapted for a wedding anniversary with the addition of a sentiment instead of the Double Link Trim strip on the easel stand; the colour scheme of the wedding (anniversary) is a great starting point, combined with either white or ivory as appropriate. 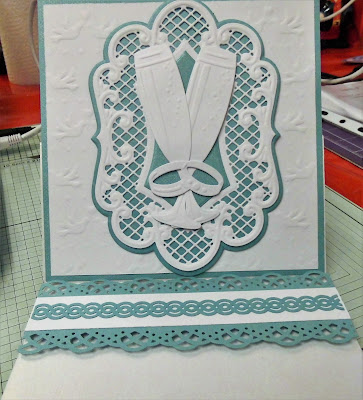 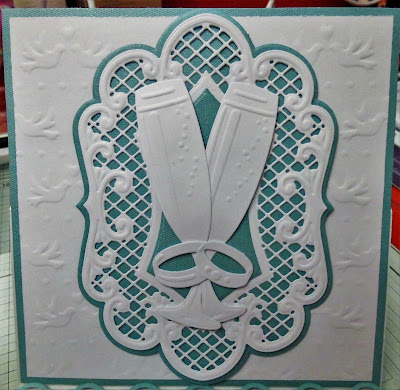 The base card is a 14.8cm x 14.8cm white pearlescent card blank, with the front scored in half to create the easel base.  Having decided on the colour scheme, I cut a piece of blue card 14.8cm x 14.8cm as the bottom layer for the card topper; the white inner piece measures 14.3cm x 14.3cm.  I embossed this using the 'love birds' texture plate from set #14 by Sizzix.  Although it is part of a Christmas set, I found it the perfect background to fit a wedding theme.  Using the Anja's Large Ovals set by Marianne Creatables, I cut the base plate using the blue card, then cut and embossed the lacy layer from white super smooth card.  The inner was then cut from the same blue card as before and everything layered up.  The topper was completed using two Champagne Glasses (again by Marianne Creatables), as well as the Wedding Rings from the same collection.

To make the trim for the inside of the card which enables the easel to stand up, I cut a piece of blue card 14.8cm x 5.5cm and punched along each of the long sides using the Swirling Lace edge punch by Martha Stewart.  I made sure that the patterns lined up, before punching along the second edge.  A 2cm x 14.8cm strip of white card was glued across the middle and finally a strip of blue card was punched using the Double Link Trim double-edge punch (again by Martha Stewart), to complete the panel. 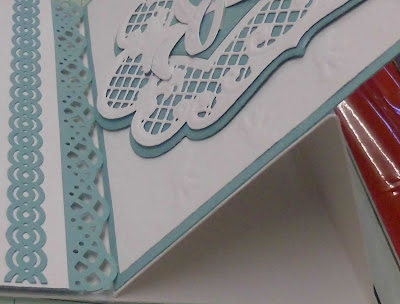 The trim strip was mounted on the inside of the card, using a double layer of foam tape.  Finally, the topper was glued onto the outer half of the front of the card, allowing the easel both to stand up and lie flat, in order to fit into an envelope (6" x 6").
I'm entering this card into Craft Your Passion Challenge 281