The inspiration for this card came from Kay Carley in the July 2015 edition of Craft Stamper.  I had just bought some Brushos and happened to have the same colours that were used in the example in the magazine.  I used ProMarkers instead of Copic pens and replaced the stamps used in the original with the Stylised Flowers by Indigoblu. 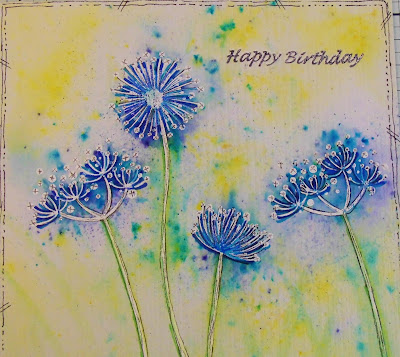 I worked on a piece of watercolour card (14.8cm x 14.8cm).  The image was stamped using Versamark ink and embossed using detail white embossing powder.  I stamped the whole image once, then cleaned off the stamp; masked off the section that I didn't want to use a second time; re-inked the stamp; removed the masking tape and stamped and embossed the left hand flower a second time.  I felt that this created a better balance to the design.  I sprinkled Ost Blue Brusho onto the flower heads and Leaf Green Brusho along the stems, before spritzing with water.  Once I was happy with the effect, I dried everything using a heat gun and then added Lemon Brusho where there was no colour; another couple of spritzes to 'wake' the Brusho powder and then a final drying off with the heat gun.  I had also dragged a water brush up from the bottom of the card to create the effect of grass before the card was dry. 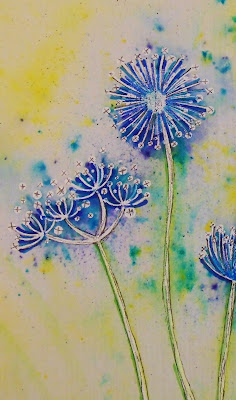 The ProMarkers that I used to emphasize the flower heads were Royal Blue and Azure.  I flicked out the colours from the centre of each flower to add depth and detail to each flower head.  Along the stems I used Lime Zest and Grass ProMarkers.  Then it was time to bring out the black fine liner pen (0.3 Grafik pen by Derwent).  I deliberately went for a sketchy effect along the stems and the embossing, as I wanted to add to the watercolour/hand drawn look of the card.  I added crosses to all the ends of the flowers and followed the effect round the edge of the image - as in the original inspiration. 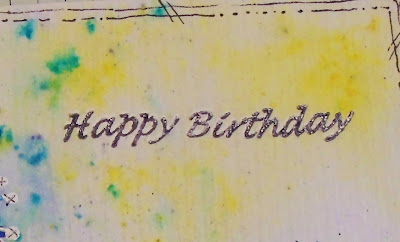 The biggest difference between the original inspiration and my version, was that I added a sentiment.  Originally, I just stamped and heat embossed the Happy Birthday in the same manner as the flowers (Versamark ink and white detail embossing powder).  The result was too bland and didn't really show up against the background.  Once I had over stamped the embossed sentiment with the same stamp and black Archival ink however, I was happy; the result echoes the sketchy format of the flowers.  The final piece was added to the front of a 14.8cm x 14.8cm card (made from A4, folded in half and trimmed square).