A Window with a Difference

This is an alternative way to present an image, rather than just sticking it on the front of a card as a topper. 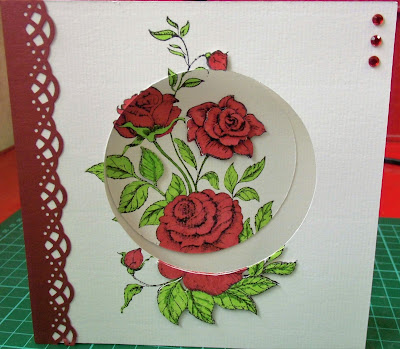 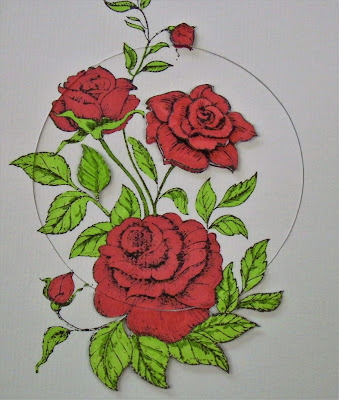 The base card is made using a piece of A4 white textured card, folded in half and trimmed to 14.8cm x 14.8cm.  The large rose image was stamped onto the front of the card using black Memento ink; before colouring, the centre was cut out using the inner edge of the middle circle from the XCut Shape Cutter System. When colouring the image on the main card I was careful not to saturate the card, as I didn't want to see the colour on the inside  when I opened it.  To avoid colouring as much as possible on the main card, I stamped the image again on a separate piece of card; coloured it and decoupaged some of the elements to add later.  I didn't worry so much about the image on the circle which had been cut out, as this was going to be stuck inside the card and the back wouldn't be seen. The middle rose was stamped a third time and coloured and decoupaged in three layers using foam pads for added dimension.
Once the colouring was complete, the card was closed and the circle was glued into place on the inside of the card, lined up with the rest of the image on the front.  The small top rosebud was then added to the main card using foam pads, as well as the leaves and the bottom of the large rose.  The card was opened and the edge of the decoupaged elements at the bottom were trimmed from the inside, using a craft knife.
The card was finished using 3 coordinating gem stickers in the top right corner. A strip of pearlescent paper 3cm x 14.8cm was punched using the edger punch from the Swirling Lace punch around the page set by Martha Stewart and attached down the folded edge on the left.