This is a more straightforward easel card - with a bit of zentangle and shrink plastic thrown in for good measure. 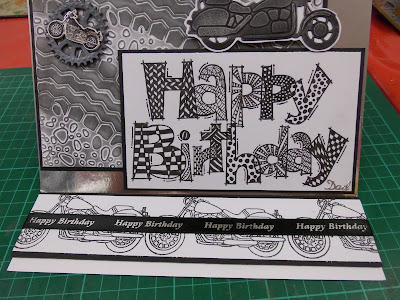 The base card is a sheet of A4 white card scored and folded in half; the front of the card is then scored and folded in half again (A4 gatefold on a scoring board), forming the easel base.
As the theme was motorbikes, I decided to stick to a pallette of black, white and silver.  An A5 piece of silver mirriboard formed the base for the easel front of the card and using zentangle seemed to be appropriate, given the colour scheme.  A piece of white card (17.5cm x 12.5cm) was embossed using the tyre tread side of the M-Bossabilities double sided folder; before matting onto black card, leaving a narrow border.  The resulting embossed image was rubbed over with Midnight Gilding Wax by Cosmic Shimmer.  The Marianne Creatables motorbike die was cut and embossed from black card; rubbed over with Pewter gilding wax; matted onto white card and cut out leaving a narrow border.  One of the dies from the Spellbinders Sprightly Sprockets set was also cut and embossed from black card and given a light rub with the same gilding wax as the motorbike.
I stamped the motorbike stamp from Mens 1 by Personal Impressions onto white shrink plastic using black Archival ink; coloured it in using black and silver Sakura pens; cut round the image leaving a narrow border and shrunk it down using a heat gun.  I have found that the trick with shrink plastic is a good pokey tool to hold it down; not letting up with the heat gun if it starts to curl until completely shrunk; finally, a solid acrylic block to flatten the end result. 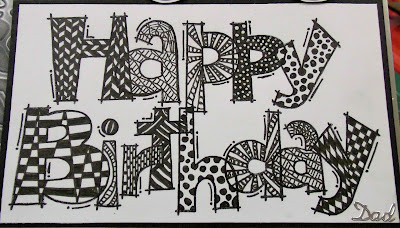 The Huge Happy Birthday stamp by Woodware makes a perfect outline for zentangling.  I decided to include some simple geometric designs, reminiscent of a chequered motor racing flag and repeated some of the designs on several letters.  Once finished, the topper was trimmed close to the image and matted onto black card, leaving a narrow border.  All these toppers were arranged onto the A5 silver mirriboard and stuck down flat - except the motorbike which was raised up on pads.  The silver mirriboard was then attached to the base easel card - but only stuck onto the bottom half of the folded front. 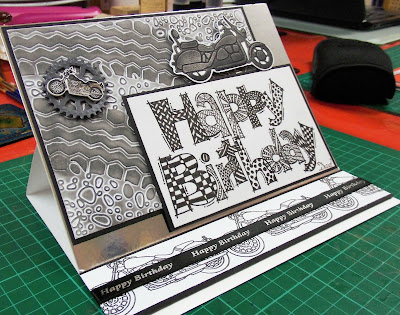 I created a decorative strip to stick inside the base card at the bottom.  A piece of white card (21cm x 4cm) was stamped multiple times with the same motorbike stamp as was used on the shrink plastic; Silver and black happy birthday ribbon was wrapped round from end to end and the whole thing matted onto a piece of black card (21cm x 4.5cm).  The strip was mounted using a double layer of foam pads, to provide a ledge to tuck the easel behind when the card is standing up.