I can't remember where I got the inspiration for this card, but it is my interpretation of a card I saw in a magazine - so thank you to the original designer.  I also (sadly) do not have any more of the double sided 12x12 card anymore, which I used as the basis for my colour palette.  It was a series of 5 or 6 different lots of card; plain on one side and patterned on the other in brown, pale blue and cream. 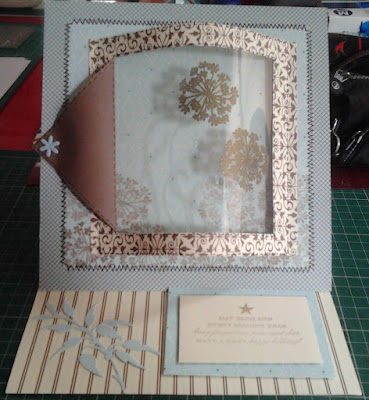 The base card is a 20cm x20cm card blank, with the front scored and folded in half to provide the base for the easel. 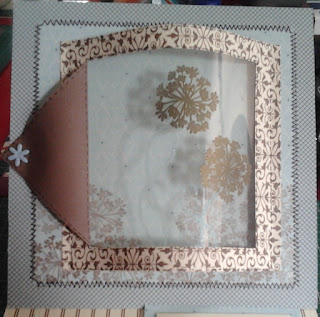 An additional 20cm x 20cm heavyweight card panel was cut for the easel topper and covered with the small grid effect blue and brown card.  A 17cm x 17cm square was cut from a piece of blue and cream patterned card and was stamped randomly along the bottom using second generation stamping, Coffee Bean Brilliance ink and the inner section of the Alium flower head from the set by Martha Stewart Designs.  Once the panel had been stuck down, a brown micron pen was used to draw faux zigzag stitching round the join.

The inside of the card was covered with a piece of cream, pale blue and brown striped card.  To hold the easel, a 10cm x 7cm plaque was cut from the same card as the stamped, back section and a 8.5cm x 5.5cm piece of cream was stamped with a birthday sentiment from the Quotes and Frames stamp set by Anna Griffin using Sepia Archival ink and matted on top using foam pads.  The whole thing was added to the inside of the card using foam pads, to help hold the easel in place when the card is open.  To finish the base/inside of the card, The leafy branch (LR0150) by Marianne was die cut from the plain side of a piece of the blue card and glued on flat. 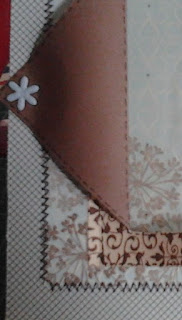 To complete the front of the card, a 15cm x 16cm piece of patterned cream and brown card was cut and scored at 0.5cm from each end of the 16cm side.  A frame was marked at 1.5cm from each edge/score line and also marked on each diagonal.  Three of the triangles were cut away and the fourth (on one of the scored sides) was folded back to reveal the plain brown reverse.  All three sides of the triangle, as well as the outside and inside edges of the frame were given a faux running stitch edge.  Before the frame was added to the card front, a 14.5cm x 14.5cm piece of heat resistant acetate was stamped twice using Versamark ink and heat embossed in gold, using the same Alium stamp head as the background.  A Versamark pen was used to draw in stems for the flowers, which were heat embossed in pale blue.  The acetate was added to the back of the frame and the frame was stuck to the front of the card along the scored edges creating a 'bow' front.  The final touch was a blue flower brad, pushed through the triangular flap before it was glued to the front of the card.