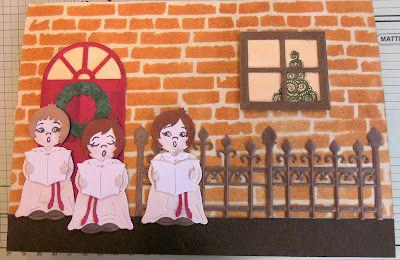 This is the finished card from my last post.  It took a lot longer to complete than I had first estimated, so I decided not to bother with a fancy insert.  All the die cuts  used Sheena's Stamping Card and were coloured afterwards using either ProMarkers or Cosmic Shimmer Gilding Polish.


The background was created using a piece of A5 stamping card, Old Paper and Tea Dye Distress inks and the fantastic 7" x 7" Brick Wall Stencil by Claritystamp.  I moved the stencil across the page in order to cover the whole background with bricks, you can barely see the join! 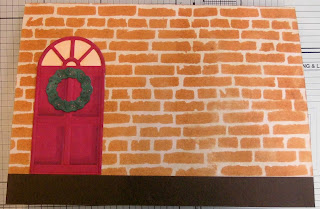 I used the door and window from the Home for Christmas die set by Crafter's Companion, as well as the wreath from the Christmas Fireplace set and two of the panels from the Fence and Gate set.  The choristers were die cut using the Trio Choir die from Cottage Cutz.  I added a 2cm strip of dark brown card along the bottom of the wall background and glued it to a landscape card blank, made from a piece of A4 dark brown card, scored and folded in half.  The door was coloured in the Cardinal Red Promarker and a panel added behind the window coloured in Pastel Yellow to emulate a light in the hallway.  The wreath was coloured in Holly and dots of a red Stardust Sakura pen added some sparkle. 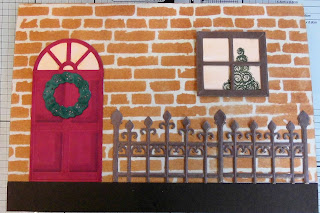 The window frame and fence panels were decorated using Chocolate Bronze Gilding Polish from Creative Expressions.  A panel behind the window was coloured in the same way as the door panel and then stamped using part of the Swirly Christmas Tree stamp designed by Sue Dix for Crafty Impressions in Olympia Green Versafine ink. 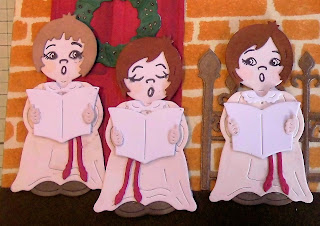 The choristers were the most fiddly to colour, stamp and glue together, but the final effect was definitely worth it.  The faces and hands were coloured in Satin, the cassocks in Ivory, the sashes in Cardinal Red and the shoes in Umber.  The cheeks were added in Blush and the collars and music left white.  Each chorister was stamped with a different face from the set in Tuxedo Black Memento ink and the hair coloured in three shades of brown (Cinnamon, Chestnut and Burnt Sienna).  All that was left was to put the card together and glue each item in place.