I have had the wooden back stamp of this image for ages.  I think it is the perfect image to play around with Fusible Film.  Then all I needed to do was sort out the layout of the card. 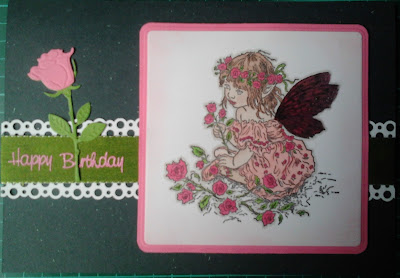 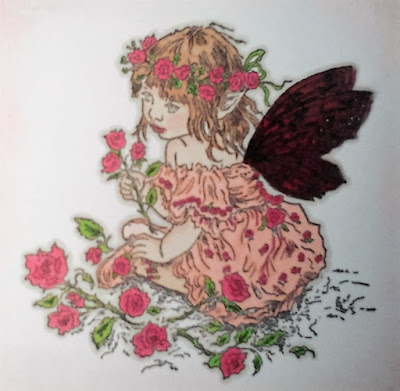 This image only seems to be available as an unmounted stamp now; Crafters' Companion hold the licence as far as I am aware.  I stamped the image onto super smooth white card using Tuxedo Black Memento ink and really enjoyed colouring it in with my ProMarkers.  I went round the finished image with the lightest grey that I had, to help bring the image forward.  To complete the wings, I used Fantasy Film by Art Glitter in Sassy Pink.  I keep a travel iron in my craft shed to use with fusible fibre and fantasy film; any iron will do as long as the steam is switched off.  Having re-inked the wings with black Archival ink, I placed 3 layers of the film over the area; covered them with baking parchment and ironed over until the image could be seen through the parchment.  All that was needed then was to remove the film, cut out the wings and attach them to the main image; I used a glue dot and only attached them where the wings meet the back of the dress.  I had coloured in the wings so that the film wings can be lifted without leaving a plain white image below. 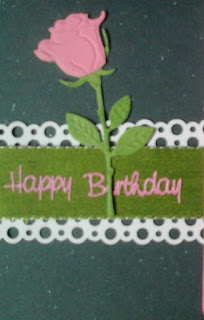 That was the easy part; next I had to plan the rest of the card, which gradually evolved from the image itself.  The roses that the fairy is holding, led me to use the Rosebud die by Marianne.  I cut and embossed it twice; once in green and once in pink; the pink rosebud was then trimmed off and overlaid onto the green version.  It is the same card that I had used to mat up the faerie image.  The base card is made from an A4 piece of dark green card; scored and folded in half to create an A5 landscape blank.  I had had the green ribbon for a little while, but needed to wrap it around something before attaching it along the front of the card.  Therefore I cut a piece of white card 21cm x 5.5cm and punched along both of the long sides, using a Martha Stewart edger punch (Bubble Bath).  Once I had placed the ribbon along the punched card, I neatened it at the back and added the whole thing along the front of the card.  A pink Happy Birthday peel off and the rosebud die finished the left hand side; the Baby Rosebud image was then added over on the right, using foam pads for added dimension.