Before this week, i had never created an art journal layout; now I've made two in three days - this time in response to the August 2016 Pick a Stick Challenge.  Ten steps, which must be completed in the specified order, although additional steps can be added in between if wished.  I find this sort of art journaling very relaxing as it is a mixture of guided steps and creative challenge. 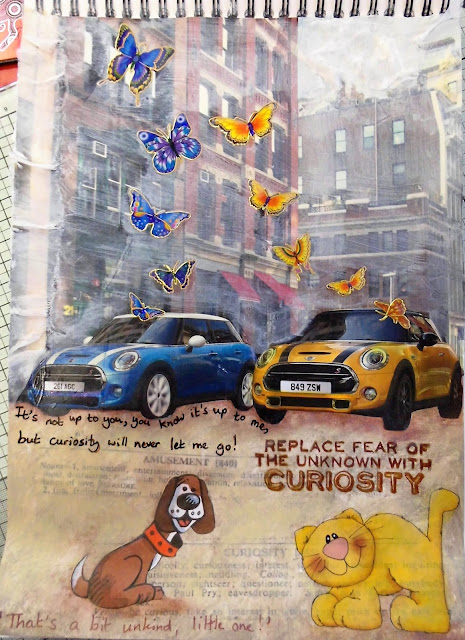 Once again I purchased a relatively cheap spiral bound book from Alexander Paper Supplies for this as I felt it would be less intimidating than using an expensive art journal.  I belong to two step by step challenge groups, so I have one journal for each.  For this challenge 10 lolly sticks are picked at random from a jar and each one has a separate instruction.  I like the fact that you can add extra steps if you wish at any stage of the challenge if you don't wish to start with a blank page for example. 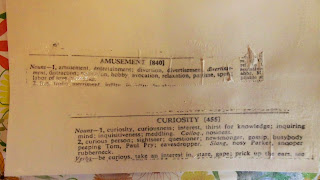 The first step was to use book paper; I loathe the idea of defacing books so I used sections of Terminology Tissue Wrap by Tim Holtz, sadly discontinued, choosing the 'Curiosity' and 'Adventure' definitions.  Once glued in place, I went over with a light coating of gesso.
The page felt too blank to me still, so I used a baby wipe to add Lake Mist, Pebble and Mushroom Adirondack paint over the bottom section of the page. Step 2 was to add a rub-on.  This involved me looking through my stash and finding embellishments, rub ons and stickers that I had forgotten that I possessed; another advantage to following these step by step challenges!

I deliberately chose a cat image, as I knew that a later step involved adding a dog picture and I must admit that I am more of a 'cat' person than a 'dog' person.

Step 3 was to use a random sentence from a random book; I chose one from 'The Elder Gods' by David and Leigh Eddings which I am currently reading.

Step 4 - Add a dog image was fulfilled using an embossed sticker from the Doggy Images set by K&Company, again found in my stash.


I had deliberately only worked on the bottom part of the page, as the photo that I was adding for Step 5 was almost an entire page advert from a Sunday Supplement.  The first car that I and two of my siblings ever owned was a mini (although a very old one), so as well as fulfilling the instruction, the photo had meaning for me.


Step 6 involved adding a quote.  I chose one from the Perspective stamp set by Tim Holtz and Stampers Anonymous as it seemed to fit the cat v dog idea, as well as one of the background definitions from the book paper.  I stamped it using Coffee Archival ink, then went over the quote using the same Sakura Pigma Micron pen that I had used to add the sentence from the book.
At this point I added an extra step.  Having gone over the whole page with Mod Podge Mat Medium to make it non porous and having dried it using my heat gun, I used my Big Brush Markers by Faber-Castell to add definition to the dog, the cat and shadows under the car, as well as blue to the sky and some shadows on the buildings.
Step 7 was to add paint using my fingers.  I decided to tone down the brown background at the bottom of the page and push the book paper further into the background by dabbing on some watered down Buff Titanium paint all around the dog and cat images.

The next step instructed me to add wings.  I thought about stamping some wings onto the dog and/or cat, but in the end used butterfly stickers (by La Blanche) in the same colours as the cars, getting progressively larger as they went up the page.

Step 9 was to add a piece of fabric.  I chose some fine white organza and added a strip down the left hand side of the buildings, as well as over the sky.  I deliberately scrunched up the fabric pieces a little as I glued them in place to add texture to the page.


In order to make the butterflies and the texture of the fabric stand out more, I chose to go over the top part of the page with a watered down wash of white gesso; wiping it off the butterfly stickers so that they would stand out clearly from the background.

The final step was to write lyrics of a song on the page.  I must admit that I cheated a little for this; I googled 'song lyrics curiosity' and found the song Curiosity by Carly Rae Jepson.  Two of the lines seemed to fit really well with the quote and the concept of the page so I wrote them below the left hand car where I felt the page was a little bare.  Initially I used the Sepia Micron pen, but in the end went over my writing with a Pitt artist pen by Faber-Castell in black.
Posted by Sarah Brennan at 19:43