A Fabulous Day at Hochanda! 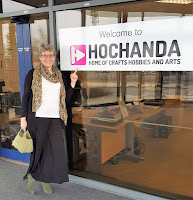 I had the most amazing day yesterday at the Hochanda investors day with my good crafting friend Eva.  Although I didn't have a lot of money to invest, I really believe in the ideas behind this channel and got in early with the CrowdCube fund raising.  Yesterday, I finally had a chance to see how my (tiny) investment was being put to good use; a company which really has the interests of crafters at heart.


As we had to be in Peterborough by 10am, it meant an early start (setting off at 7am).  However once we arrived, we were treated like royalty - starting with the amazing thrones in reception which are there for any suppliers which visit Hochanda.

We were the first to arrive and were therefore in group 1 (of 6); that turned out to be a great choice as we were later shown around by Jamie Martin the CEO himself and therefore were able to have any question answered really honestly by someone who really knows the ins and outs of the business.  Kirsty Goodwill, one of the talented Claritystamp design team members, was also in our group and I am really looking forward to seeing her samples on the Clarity shows over the next few days.
Everyone we met from reception onwards was friendly and open and nothing was off limits.  It is difficult to believe that the channel has only been running for 7 months; they may have had teething troubles - especially when some launches have exceeded every expectation - but the quality of the shows, demonstrating and presenters (who facilitate the crafting rather than overpowering the demonstrators) have improved tremendously in a very short space of time.  I was amazed at the way that buyers have real autonomy to try new products and how small businesses and suppliers are really given the time and opportunity to build their popularity.  As Jamie put it, there is a culture of 'Fail to Succeed' so people are given an opportunity to share their products; even if they are not an instant financial success, if the audience has at least been entertained and shown something new, then the precepts of the channel have been met.  The channel isn't called Home Of Crafts, Hobbies AND Art for nothing!

It was fascinating to see everything behind the scenes; from the gallery to the studio, the buyers, call centre, the tables laid out with products ready for that evening's One Day Special, the virtually empty warehouse (as most products are sent out directly from the suppliers) and the I.T., accounts and H.R. department.  There is a real family atmosphere; the buyers will pitch in on the phones if needed and many people have been promoted from within and given the opportunity to develop.

The technology is amazing; automated cameras mean that the director can set up the shots remotely and it only takes three people to send out a live show; the producer and director in the gallery and the floor manager ensuring that everything goes smoothly in the studio.


We were lucky enough to be in the studio as one live show ended - Fiona Clayton and Alex Turchyn with the Crafter's Companion Weekend Wow - and they set up the next - Fiona Jones and Matt MacNamara with Efcolor cool enamelling.


Even the crafting guests were happy to chat.  Tamara Melvin from The Great British Sewing Bee was demonstrating the One Day Special and Fiona Clayton from Crafter's Companion was busy with the Weekend Wow, but they still made time to chat and have photos taken between shows!
The biggest highlight of the day was totally unexpected.  Hochanda are intending to branch out to Germany and my friend Eva who is German joked about a job.  She was immediately offered the chance at a screen test.  The choice was, go home, prepare a demo and come back another day, or use some products that they had available, put together a demo and go into the studio an hour later when there was a repeat showing to do the screen test there and then.  That was a no brainer!  Between us, we came up with an idea for a demo with the products that were made available and  with no time to get too nervous Eva was in front of the camera.  The first part (the demo) was done in English with Matt presenting; followed by Eva on talk back presenting the products in German.  I was so proud of how she did and really look forward to hearing the response.  My only regret is that my camera died,so I had no opportunity to get a shot of her in the studio or on TV in the gallery.  Good luck Eva- I hope I get to say that I know a German crafting TV personality one day!

Email ThisBlogThis!Share to TwitterShare to FacebookShare to Pinterest
Labels: Hochanda